It doesn’t seem that long ago since James Tavernier finally lifted the Scottish Premiership trophy on behalf of Rangers – for the first time in ten years and for a world record 55th time. I’m not ashamed to admit I shed a tear that day and the moment will live with me forever.

Since then, time, as always seems to be the case for me as I get older, has passed quickly. The weather has been fantastic (even in Scotland for a change!), Euro 2020 was most enjoyable and a run of major golf tournaments kept me occupied over the close season.

With that in mind, the new season kind of crept up on me a wee bit and, as Rangers continue to struggle for consistent good form, the same might be said of Steven Gerrard and his players. A month after the summer transfer window closed, changes have been minimal with only Fashion Sakala Jnr, Juninho Bacuna and John Lundstram the only new faces. Guys like Jack Simpson and Scott Wright did arrive in the previous window and had the benefit of featuring fairly regularly in a Rangers jersey towards the end of last season. Perhaps our best ‘signing’ was Finnish international midfielder Glen Kamara who, just last week, extended his contract until 2025 which every Rangers fan was delighted about.

Departures have also been kept to a minimum. In terms of fairly notable names, only George Edmundson, Greg Stewart, Jordan Jones and Jamie Murphy have left from the senior squad and, whilst other fringe players left on loan, none of them have ever been considered genuine options in any case.  Unfortunately, Gerrard has lost Swedish international defender Filip Helander and English attacker Ryan Kent to injury – both key players for us in European games in the last couple of seasons.  Helander will miss all group stage games but Kent should return to action later in October.

All things considered then, that leaves us with a fairly balanced and acceptable squad of around 25 players with key Scottish midfielder Ryan Jack still to join the group into October after being out injured for six months. 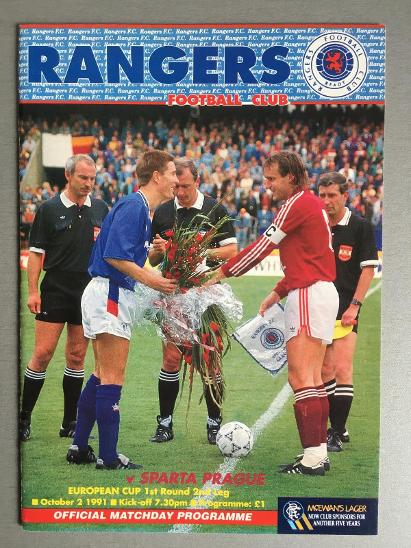 In terms of our new signings, despite being not completely sure about his role for the team, Fashion Sakala’s potential also extremely evident. Quick and confident on the ball, he’s shown up fairly well in some short cameos so far. His decision-making isn’t quite up to scratch but that will come with more time with his new team-mates. Not to mention plenty training opportunities with our player/coach Jermain Defoe who knows a thing or two about being a forward player.  John Lundstram has also had a fairly lukewarm start to his Rangers career including a silly red card in the EL qualifier with Alashkert which didn’t help his reputation amongst the fans. Since then though, he’s knuckled down and has done a lot better when called upon over the last few weeks even if he might still not be considered a first pick. Our other midfield signing Juninho Bacuna has not yet played enough to analyse fairly.

All three new players have fitted into our preferred 4-3-3 system fairly well but haven’t, as yet, displaced any of our key men from last season.  In that sense, captain James Tavernier remains an important attacking outlet from right back and his deputy skipper Connor Goldson our best central defender and defacto leader. In midfield the evergreen Steven Davis and Glen Kamara are vital cogs for us to recycle possession while Alfredo Morelos is our talisman in attack and his goals across our last few European campaigns have seen him break Ally McCoist’s record in that regard. Others such as Borna Barisic and Ryan Kent haven’t yet found their best form but younger lads such as Nathan Patterson and Calvin Bassey have shown up well when deployed this season.  One of our strengths is that we can be unpredictable in terms of personnel but a few injuries have stifled that somewhat.  I’d expect a starting XI of McLaughlin, Tavernier, Goldson, Balogun, Barisic, Lundstram, Davis, Kamara, Hagi, Roofe and Morelos on Thursday night with the famous Romanian name perhaps our most dangerous creative outlet for the match.

What are our aims this season then? Well, first and foremost retaining the league title has to be the main priority as, not only will this cement our position as Scotland’s premier side, it delivers a huge financial boost with automatic CL group stage qualification for season 2022/23. That cannot be underplayed. Ironically then, it could be argued that qualifying from this season’s EL group stage is somewhat less necessary. A match-day one loss at home to Lyon means the pressure is already on if we’re to beat Sparta and Brondby into second place.

In conclusion, we’re now well into Steven Gerrard’s fourth season in charge of our great club. It’s been a roller-coaster era of ups and downs that, for me, seem more emotionally demanding than any previous time following Rangers. Indeed, it was only last season that we seemed to iron out those bumps with a year of consistency that may never be bettered. Setbacks versus St Mirren, St Johnstone and Slavia Prague still sting now but the broader picture showed a 2020/21 campaign of steadfastness, stability and success at last.

The outstanding question is can we match all the high points of last season? Our attacking play and goal threat, our defensive fortitude, our unbeaten league record and our European-level belief were the four pillars that our season was built on and they must stand again this term if we’re to yield similar results and, dare I say it, improve further. Unfortunately, after an early loss in the league and a poor outcome against Lyon – along with some disappointing form in a general sense – the early signs in this campaign are we’ve not yet found that improvement.

Nevertheless, no-one knows what lies ahead but last season showed Rangers are once again capable of being Scotland’s premier club but it’s now time to prove that once more – whether at home or abroad.

This website uses cookies to improve your experience while you navigate through the website. Out of these, the cookies that are categorized as necessary are stored on your browser as they are essential for the working of basic functionalities of the website. We also use third-party cookies that help us analyze and understand how you use this website. These cookies will be stored in your browser only with your consent. You also have the option to opt-out of these cookies. But opting out of some of these cookies may affect your browsing experience.
Necessary Vždy povoleno
Necessary cookies are absolutely essential for the website to function properly. This category only includes cookies that ensures basic functionalities and security features of the website. These cookies do not store any personal information.
Non-necessary
Any cookies that may not be particularly necessary for the website to function and is used specifically to collect user personal data via analytics, ads, other embedded contents are termed as non-necessary cookies. It is mandatory to procure user consent prior to running these cookies on your website.
ULOŽIT A PŘIJMOUT
0
0
Would love your thoughts, please comment.x
()
x
| Reply